I am notorious for Pinterest idea fails! I can’t make the turkey cupcakes look right, the “easy” burlap wreath where you just tie a few pieces of burlap around in a circle- Ha! I mean it should be simple… you just tie burlap pieces around in a circle right?!?! On top of that, I can’t even figure out a fishtail braid that my daughter has begged me to learn for 5 years! 5 years! So, long story short I’m used to failing at Pinterest- So why did I think this would be any different?!?!

A few weeks ago I had some new headshots taken for my children’s books coming soon… Like really SOON! YAY! For some reason I thought it would be a good idea to scroll through Pinterest to find some ideas for poses! (haha!) I came across the cutest images of this beautiful young adult girl blowing confetti out of her hands ever so gracefully, yet fun looking. I thought… “That would be perfect for my celebration photo for my new children’s book”- Well… my poor photographer @heartphotography definitely bit off more than she could chew with me! We were sweating like crazy too! Thank you HOT July Georgia!

Lets just say- I’m not one of those easy people to capture on camera (it’s bad) and acting well that’s not my forte’ either. Photographer to me: “Just relax, and smile” sounds easy right? IT’S NOT! So we get through the torture of the headshots and then it’s time for my favorite part… The part I was so excited about… The perfect Pinterest idea! Confetti!!! We get the confetti out and she says, “Alright, lets do it!” So I go to blow my very best blow and the photographer looks scared to death! She actually says, “Ummm, that looks pretty ridiculous! Lets try again… JUST relax.” (I’ll post that first picture blow in the comments  for your enjoyment) I try 6 more times!!! Fail, fail, fail, fail, fail, failed!!! Finally, the photographer was like “shape your lips like the girl in the picture” First of all let’s talk about the girl in the picture… she has these beautiful thick un-lined, wrinkle free, lips… I was setting myself up for failure to begin with! I looked at the Pinterest picture again and thought surly I’ve got this! I just need to blow the confetti off of my hands… Elementary right?!?! I blew once more and well- it was just bad! HORRIBLE… Photographer just laughed!

I love Pinterest and I love all of the ideas but there are two people: 1. People who can make a Pinterest idea perfectly and 2. People who CANNOT… I am the latter.

Finally, photographer girl was like, “I have an idea!!!” I get excited like maybe she has some kind of botox or something- Maybe she’s gonna put on some magical lip plumper! I’m thinking: This girl is about to give me Angelina Jolie lips for my session! Wow! How awesome! (For the record I’ve never had botox and I probably will NEVER but in that moment I may have considered!) 🙂 Instead photographer girl says, “lets fake it!” She has me pose with my very best blowing out candles, (confetti in this case) relaxed face, lips out, pouty face I could muster… It was a catastrophe on my part! Apparently, I can’t do this… Another Pinterest idea I can’t do. I can’t blow confetti out “prettily!”

I can’t stop laughing! It’s just more proof I can’t Pinterest! I just can’t! So, here I am trying to figure out how to shape my lips, holding the confetti in my hands, and getting ready to blow! (Doesn’t work…)

But you know what?

It turns out this happens to be one of my favorite pictures from the session… I never mastered the Pinterest “perfect confetti blow” but my photographer did capture a true moment of me being me! This picture of me laughing at myself is who I am… I can usually find humor in myself! I love Pinterest and I love all of the ideas on their site, but I also love to laugh (especially at myself)! So, if you too are a Pinterest failure welcome to my club! I’d love to see or hear what projects/things you’ve failed at off Pinterest… If you don’t have any that’s awesome too! Tell me about your Pinterest successes!

So when you look at this pic don’t think about why I am holding the confetti in my hands… Think about how I found some humor in my failure.

P.S. Pinterest, I’m going to need some time to think things through. It’s not you, it’s me… 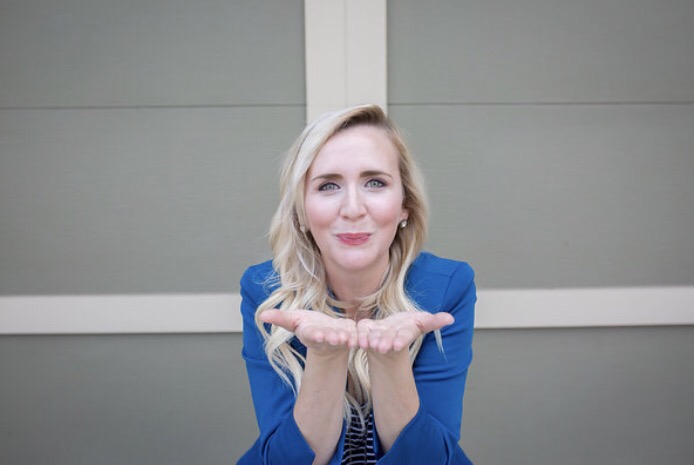